Sony’s stunning top-of-the-line MASTER Series OLED is consistently one of the most highly rated TVs available. And yet somehow they keep managing to improve it. This year, they’ve done it by adding a revolutionary new processor — the first to use cognitive intelligence in a TV.

The XR-65A90J’s Cognitive Processor XR takes conventional Artificial Intelligence a step further by emulating the way our brains think and respond when we see and hear things. This creates a beautiful, true-to-life picture paired with immersive, accurate sound. 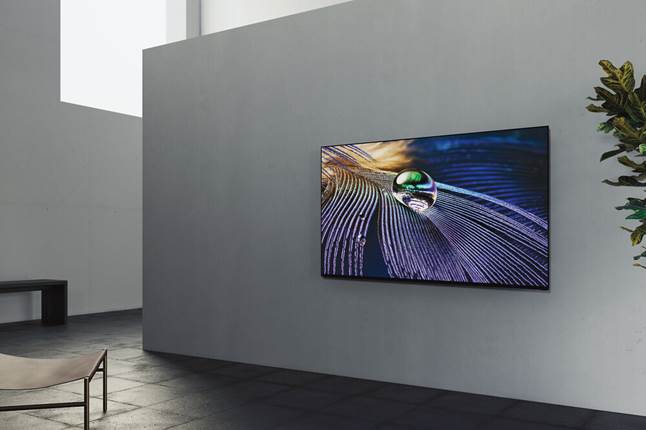 The Living Decor feature lets you display artwork, photos, and screensavers when the TV is not in use.

All OLED TVs have self-illuminating pixels that can turn completely off to deliver absolute black. What’s new and special about the XR-65A90J is the re-engineered panel that makes it the brightest OLED TV that Sony has ever made. And with the power of the new processor behind it, you get intelligently controlled contrast for realistic depth and sharply defined details, even in areas of shadow or glare.

The XR processor also cross-analyzes individual picture elements and quickly identifies the human focal point, so that it can immediately enhance each detail of that area. Instead of applying generic changes to the entire frame, it recognizes how individual parts of the whole interact with each other and makes precise adjustments create a more natural picture.

The ‘A90J’s XR processor contributes to a richer sound experience, too. Its 3D Surround Upscaling technology can create a heightened Atmos-like soundfield no matter what the source.

When combined with the TV’s Acoustic Surface Audio+™ technology, sound effects and dialogue track the on-screen action, creating an even more immersive experience. Instead of the tiny — often down-firing — speakers that most TVs have, the ‘A90J uses actuators on the back to send vibrations through the screen to produce sound from its entire surface.

And if you still want more, the TV can become the center channel in a receiver-and-speakers setup.

New this year is the built-in Google TV smart app platform which consolidates a wide range of streaming services into a single user interface. Watch an episode of Killing Eve on Hulu followed by The Expanse on Amazon Prime all from one watchlist, without having to dig around in individual apps.

And if you’re feeling really lazy, you can simply ask the remote’s built-in Google Assistant to pull up a show or movie. You can also adjust the volume, change channels or inputs, and control other basic TV functions using your voice.

A perfect partner for your new gaming console

The XR-65A90J will support enhanced Audio Return Channel (eARC) and 4K at 120Hz right out of the box. After a firmware update, it will also support Variable Refresh Rate (VRR) and Auto Low Latency Mode (ALLM) for smooth graphics without frame tearing or stuttering.